This. This is my life, folks. A giant fucking snowball of shit that just keeps on rolling. 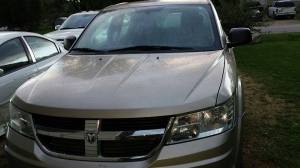 So close. So fucking close.

I’ll try to make this short, because the longer I let it sit and think about it, the angrier I will get. I’m feeling quite a range of emotions right now, ranging from sad, to frustrated, to absolutely livid. I’m tired of nothing ever working out for us. It honestly feels like every time things seem to start looking up, everything falls apart. I don’t know what we did in our past lives to deserve this shit storm that we are living in, but I am sick of it. So. Fucking. Sick of it.

I’m sure as most of you who follow me on Twitter have seen, we’ve been having car problems for a very, VERY long time. We’ve tried to raise money on several occasions to try and replace our Mustang, but it never worked out. Well, several weeks ago, our Mustang died. Completely, and utterly, died. So we started a GoFundMe page to try and raise some money to get a used car. Despite the fantastic efforts of my friends donating, re-tweeting, and sharing our page, we were only able to raise $305, which is less than 1/8 of our goal that we set.

I don’t currently work, so I don’t leave our apartment ever, but Kyle has been needing to rely on his mom to bring him to work (and she lives 40 minutes away), as well as a few of his co-workers. The problem is, he is the only full-time person in his department, so there really is never anyone working at the same time as him. To top it all off, he just got a second job, where he knows nobody, so the only person who could drive him to that job is his mom, and this job is even further from her than his other one.

But, things were finally starting to look up. After weeks of searching and reaching out to our families, Kyle’s aunt and her wife offered to give us one of their vehicles, as they only had $5600 left to pay on it. It was a nice, newer, family-sized vehicle, and we were so excited. Too excited. And for a moment, we forgot that our lives are shit and that things never work out for us. Over the course of the week, we worked out how much we would be giving them in payments, and then just today, we bought the insurance for it.

But, like everything else in our lives, it had to totally fall apart.

Just a few hours ago, Kyle was in the middle of a conversation with his aunt about bringing the car down to us TOMORROW, when she suddenly stopped responding. After a little while, we got a message from Kyle’s mom, saying that she needed to talk to us about the car. And the alarms went off. We are able to smell disappointment from a thousand miles away. So Kyle called her.

According to Kyle’s mom, while Kyle was talking to his aunt about the car, she was actually in the middle of a heated argument with her wife, about who knows what. They are always fighting about something. Basically, her wife stormed out, shouting that she was leaving, and took the vehicle that was supposed to go to us, instead of her own vehicle, just to spite Kyle’s aunt.

Then Kyle threw his phone and let out a string of profane words.

I seconded everything he said.

Now everyone is fighting and blocking each other, and we are sitting here stunned, upset, depressed, helpless. To top it all off, Kyle’s mom seems to think that despite having zero credit, Kyle should be able to “easily” get approved for a loan on a used car, because of how much he makes. And she keeps arguing with us, and can’t seem to understand why we keep getting denied for loans. It is so fucking infuriating that she doesn’t understand why we aren’t getting approved.

Kyle has two jobs now, but has yet to start at the second, so there is no income from them yet. He also has no line of credit or credit history, as he is only 20 and hasn’t really established any, since everything has always been in my name. And of course, despite having EXCELLENT credit, I can’t cosign for him on anything because I’m not currently working.

So now we are searching through the inventory of all of the used car places around us, searching for anything that we can afford without having to give them a huge down payment, since we can’t get a loan or financing.

This. This is my life, folks. A giant fucking snowball of shit that just keeps on rolling.

Thanks for reading, I’ll keep you all posted.

3 thoughts on “Never Get Your Hopes Up”