I’m already itching for my next one, and I’m still riding this high… what have I gotten myself into?!

Hello, friends. I know I’ve been a bit absent lately, and I promise I will get you all caught up on recent events, but it will more than likely be in video blog form, as I just don’t have the time, or patience, to write it all out. However, I did want to share with you all something very exciting that happened to me recently…

I joined the modified family! That’s right, I finally got my first tattoo… and then my second! Kyle and I have been planning out these tattoos for months, but there was never a good time, or enough extra money, to go and get them done. Well, our lives just did a completely 180, and we are now headed in a much more positive direction, and decided that it was time.

I’ve mentioned a bit in the past that I love metal and ink. I’ve had my eyebrow pierced twice (removed now), as well as my ears, and honestly, if I didn’t have an adorable, grabby toddler, I’d have several more. I love piercings, even though I know I probably couldn’t pull them off. The same goes with tattoos. I love tattoos. I’ve had “get a tattoo” on my bucket list since I was probably 15 or 16 years old. Well, 10 years later, I finally did it!

Fresh ink! Because time and money were still a bit of an issue, I was not able to get all the detail that I wanted in either tattoo, but there will be opportunities in the future to add to them. Overall, I am really happy with how they came out!

The first tattoo is my son’s birth date, in Roman numerals, the second is the ever popular semicolon tattoo. Kyle and I wanted to get matching tattoos of his birth date for a while, and figured it was a small, simple enough tattoo for a first tattoo. I was in contact with a few different places, but after browsing through portfolios and ratings of all the tattoo shops nearby, and finally settled on Permanent Images Inc. Tattoo Shop in Ottawa, IL. Great work, great prices, great ratings.

So yesterday, we went in for our appointment, and met with Ryan, our artist. We didn’t have anyone to watch Liam, so he came along with us, which I wasn’t worried about, since they had a nice waiting area, and he is seriously the best behaved child on the planet when we’re in public… but we brought snacks and toys just in case. Our artist cut us a really good deal on our tattoos, since we were each getting two small-ish ones, and since they were running a special where if you donated $10 to the charity they were supporting, it would be $25 off your tattoo, it came out to $70 for the both of us. Pretty awesome. After signing a couple forms, we told Ryan what we wanted, and he sketched it out for us. Piece of cake. Kyle had wanted to go first, just to get it over with, since he is terrified of needles, but changed his mind, and wanted me to go before him. I was fine with that, since I was not nervous at all. I’m weird like that.

I sat down in the chair, with my fiance and toddler son watching, and Ryan did a test dot on my shoulder. I barely felt it. No joke. It didn’t pinch, or scratch, or burn… it was completely painless. Any minuscule amount of nervousness or fear that I was feeling completely melted away at that point, and Ryan got to work on my shoulder. I don’t know how long it actually took, probably 15 minutes or so, but it felt like 5. And, honestly, it felt good. It was such a rush. I was riding quite the adrenaline high. He did mention that I bled quite a bit, then showed me the paper towel in his hand, which had an exact imprint of my new tattoo… in blood. Oops. I had known not to take Tylenol for my headache that day, but had forgotten that I took some the night before. It was fine though.

After he finished my shoulder, he asked me where I wanted my semicolon tattoo. I hadn’t been able to pick between the back of my ear, or my wrist, but finally chose to do it on the side of my wrist, since I didn’t really want the gun that close to my… well, my head. Let me tell you, that tiny, little tattoo on my wrist hurt about 3x worse than the one on my shoulder. The pain wasn’t that bad, I’d say it was like getting scratched by a cat, but I have a really high pain tolerance, and it didn’t bother me that much. Actually, it didn’t bother me at all. I’ve dealt with pain before… I kind of like it. I even watched him the whole time (Kyle had to look away for his, haha). Semicolon took about 5 minutes, and then it was done. He only covered up my shoulder tattoo, and only really because I was still bleeding a bit, and then it was Kyle’s turn. 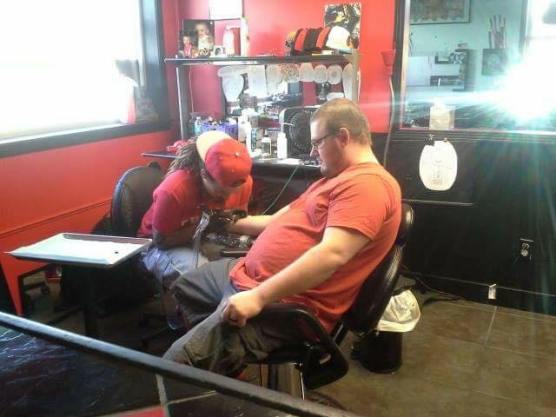 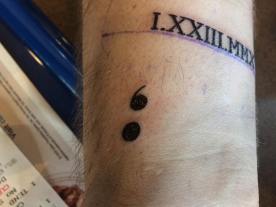 He was nervous. Really nervous. I told him over and over again about how relatively painless it was, and how fast it goes by, but it didn’t seem to help much. But he did it! I got a good chuckle out of him needing to get his arm shaved, because it looks all patchy and silly now. He didn’t really think about his placement as much as I thought about mine, and he has been a bit disappointed in where his semicolon is, and how it is facing the opposite way as his Roman numeral tattoo, but I told him it looks fine, especially since he already has more plans for that arm, and once he adds more to his sleeve, it will all come together nicely.

I am so happy. This was something huge on my bucket list, something I have wanted for so long. I have a massive list of ideas for future tattoos, and have already begun to plan out my next three designs and where I’ll put them. I’m making sure to take good care of it, using the right antibacterial soap to clean it a few times a day, but there are so many sites online about tattoo care, and they all have varying advice. Some say to use ointment for the first few weeks after you wash it, until it is healed, others say to just use unscented lotion right from the start. Some places say it should remain covered for 2-4 hours, or 6-8 hours, or 24 hours… my artist only covered one of mine, and said to take it off after 45 minutes, and wash it after an hour. Of course, all tattoos are different, and require different care. Mine are both small, and are in places that don’t really get rubbed or bumped a lot, and neither of them are really red or swollen.

I’ll just use my best judgment I suppose.

I’m already itching for my next one, and I’m still riding this high… what have I gotten myself into?!

How many of you are modified? Tattoos? Piercings? Other? Share your beautiful bodies with me!