Hello, friends. Today is Wednesday, and I am finding myself still needing to recover from our weekend adventures. I am starting to feel like myself again, but I am tired. I had a good time, and did a lot of socializing, but that’s the main reason why I find myself so exhausted. Being social is exhausting, y’all. I don’t even know where to begin!

I guess I’ll start by telling you that we found out several weeks ago, maybe a month or more, that Kyle’s aunt would be coming from South Carolina with her new fiance to spend some time here in Illinois to celebrate their engagement and upcoming wedding. On the same day we found out about Kyle’s aunt’s visit, my own aunt reached out to me to tell me she would be coming to Illinois on the same days, and she really wanted to meet me (she’s my mom’s half-sister, and lives in Oklahoma, I’ve never met her). Kyle and I really wanted to fit both aunts into our schedules, because we hadn’t seen his aunt since his father passed away, over four years ago, and I have never met mine, who he wanted to meet as well.

After a lot of back and forth, we learned that my aunt would not be able to come to Illinois, which took a little bit of stress away, but was also very sad, since we were really looking forward to meeting her. There’s always time in the future, though! So, we started to hash out the details of his aunt’s visit with his family.

Fast forward to this past Saturday. Kyle’s aunt was in Illinois with her fiance, and they were having a party at his other aunt’s house, about 2 hours south of here. We were asked to bring a dish to pass (something that always stresses me out, since I don’t really cook much), and I ended up making Skinnytaste’s Southwest Black Bean Salad, which was absolutely delicious, and a huge success! It cost less than $8 to make double the amount that the recipe calls for (the avocados were the most expensive part), and I whipped it all together in about 15 minutes, between doing my hair and makeup the morning of the party. Cheap, easy, and delicious!

We left the house around 10:00 in the morning, and stopped at Target, because I needed to exchange a liquid lipstick that I had bought the day before, which I absolutely hated on me. I’ve been a little obsessed with liquid lipsticks lately, and have managed to collect a few in a very short amount of time. I’ll be buying more on payday. Stop judging me! After we stopped at Target, and I got my new lippie, we grabbed some breakfast at McDonald’s, and headed to out for the party. I even packed extra lippies, just in case… of… emergency?


The drive was easy enough. Long, but easy. There was a little bit of construction here and there, which made the ride feel like it took longer than it should have, but it wasn’t bad. We were hoping Liam would nap, but he didn’t. He was good the entire time though, except for the last 20 minutes or so, when he got a bit fussy and we had to stop at a gas station so we could all pee and stretch our legs.

We were told to be there around 1:00, and it was about 12:15 when we arrived, and we were still somehow one of the last ones there. The party was in Kyle’s aunt’s back yard, which is big and beautiful, just like her house. His entire family takes a lot of pride in decorating their homes, and it shows. Two of Liam’s girl cousins were there, and he immediately went over to play with them and all of the toys. Kyle’s aunt has a successful in-home daycare, and she has TONS of fun, outdoor toys. Liam wanted nothing to do with the adults, and was 100% engaged in the toys. Happy boy!

It was nice. We all sat on wicker lawn furniture, sipping drinks, talking about all kinds of things. The food was fantastic. There was BBQ, potato salad, macaroni salad, several fruit bowls, a veggie platter, chips and dips, my Southwest Black Bean Salad (which can be used as a topping, a side, or a dip), and all kinds of desserts. Of course, there was also cake! So much food. So much GOOD food!

We stayed for four hours, but had to leave before they started the bonfire, and busted out the hot tub, because we believe pretty strongly in not straying too far from Liam’s schedule, and his bedtime is at 7:00. We’re lame, I know. The drive back felt like an eternity, but Liam passed out immediately since he had missed his nap that day, so it was easier. We got home just in time for bedtime, and then Kyle and I started watching season 12 of Criminal Minds, and relaxed.

Kyle had Sunday off as well, so we decided to drive to his mom’s house, since the Sweet Corn Festival was happening in her town. We hadn’t gone last year, because it is usually the same every year: Loud, dirty, loaded with tourists, and hella expensive, and this year was no different, even with a new company putting the festival on. It was disappointing. Really, really disappointing. The place was packed with tourists from Chicago and the surrounding areas, who always end up being the rudest human beings on the planet, and despite the trashcans everywhere, we were walking through a literal sea of garbage, right on the main street of town. So gross. Now, I know carnivals and festivals are always expensive, but in previous years, you could get 3-4 plays of a game for $5… not this year. $5 for one dart. $5 for one throw. $5 for one ANYTHING. We were hoping to get some good prizes for Liam this year, but we also have bills to pay, ya know? We let him play a ducky game, and pick out his prize, and then Kyle and I did the dart/balloon game, and won him another one. 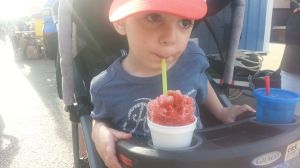 Aside from getting a few shaved ice slushies, we decided to skip out on the carnival food, and instead went to our local KFC/Taco Bell hybrid restaurant for dinner with Kyle’s mom, as well as his stepfather, who was unable to join us at the festival because his health issues have been getting too severe, and he can barely walk these days without pain and being out of breath. No doctors or specialists can figure out what’s wrong with him, and it just keeps getting worse… it’s sad.

Then, we came home to unwind and watch more Criminal Minds. Honestly, the last few days have been a blur now. Kyle went back to working 16 hour shifts, I’ve woke up with a crippling migraine every morning, and Liam has been going stir-crazy being stuck indoors. I think we might make a trip to the park today, if it isn’t too hot outside. We both need some sunshine again.