For my game, entitled The Stille, I decided to go with a simple, 2D top-down RPG fantasy game (think Pokemon, or Stardew Valley), because those are my personal favorite styles of games, and I love them.

Hello, friends! Lots of fun things have been happening in my life lately, and by “fun things“, I mean that my life has been filled with never ending chaos and disappointment lately, and I needed some sort of distraction. I’ve actually been mulling over the idea of making my own game for a long time, like… years and years, but I never knew how. I thought that you had to know coding, and scripting, and buy all of this crazy expensive software, and be an artist, etc., but you don’t! There are tons and tons of free programs and resources out there to help you make the game of your dreams.

For my game, entitled The Stille, I decided to go with a simple, 2D top-down RPG fantasy game (think Pokemon, or Stardew Valley), because those are my personal favorite styles of games, and I love them. After scouring the internet, and countless forums, I decided that I wanted to use the wildly popular RPG Maker program, because there were several different versions, with different graphic styles, and price points. Of course, I’m broke, so was happy to discover that RPG Maker offers free 30 day trials of their products.

I went with RPG Maker VX, which I personally feel may have been a mistake for the sake of creativity (I’ll get into that in a bit), and kind of just jumped into making the game blindly, with zero idea of what I was doing. Surprisingly, it was pretty easy to pick up, with only a few hours of digging for tutorials and videos for very specific things online. One reason that I was a bit disappointed with myself for picking to use RPG Maker VX, as opposed to RPG Maker MV or VX Ace, was because when it comes to importing custom tilesets from creators online, you just can’t. Flat out can not. I was able to import a few custom character sprites, and custom battlers, but was extremely disappointed that the game would not allow for custom tilesets, like the other game versions. 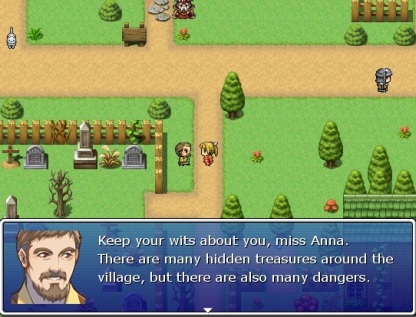 Because of this, I had to use the tilesets that came with VX, and they were not that great, especially when it came to furniture. Basically, if I wanted the decor and furniture to properly match the time the game was set in, I had to make the game set in a quaint, older style village. There were no options for electronics, cars, paved roads, or anything modern. So, that’s what I went with. Old villages. Another thing that bothered me a little was that nearly all of the character sprites provided were wearing some sort of armor, unless they were a maid, a priest, a nun, an elderly person, or a child. So just about everyone in my game is just randomly wearing armor, or capes, etc., which is kind of weird, right? There was also an entire set of sprites that came with the game, but did not include face sets, so I couldn’t use them for any dialogue either, which was disappointing. Of course, I could have downloaded some custom sprites to put into the game, and I did end up doing this, but unless they also came with the character face sets, you can’t really use them much for dialogue smoothly.

However, like I said, I was able to create my own game, in a little over two weeks, completely free. In the future, should I decide to dish out $79.99 for a full version of RPG Maker MV, or find it on sale on Steam, I will have so many more options for customization, and themes, which I look forward to. I do plan to create more games in the near future!

For anyone interested in playing The Stille, you can check it out on GameJolt HERE, and download it (Windows only, sorry)!

Thanks for reading (and playing), my friends!

One thought on “I Made A Game!”