Hello, my name is Janise, and I am a Facebook creep. END_OF_DOCUMENT_TOKEN_TO_BE_REPLACED

I was in some sort of dive bar with a bunch of old friends from high school, just drinking and having a good time. END_OF_DOCUMENT_TOKEN_TO_BE_REPLACED 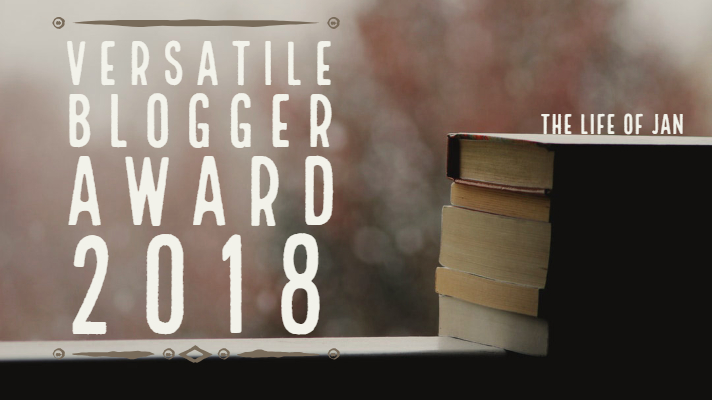 Hello, friends. It’s no secret that I’ve been neglecting my blog for some time now, and I wish I had a good excuse, but I don’t. Life’s been a bit chaotic. END_OF_DOCUMENT_TOKEN_TO_BE_REPLACED

Hello, friends! I want to tell you about the walk I took with my son yesterday. It was… well, it was something! END_OF_DOCUMENT_TOKEN_TO_BE_REPLACED 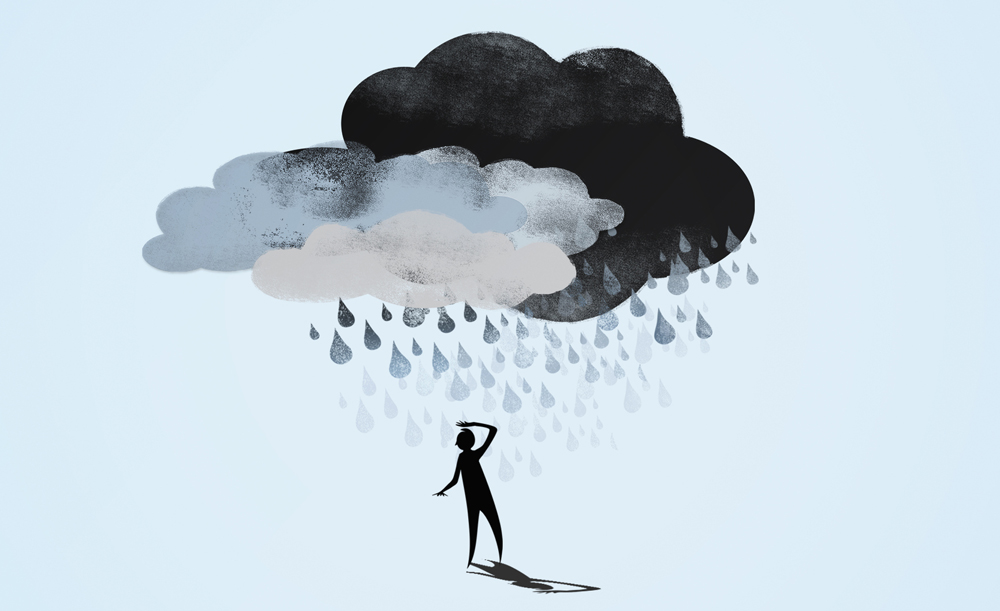 I have been having a hard time lately. With just about everything. Honestly, I don’t even know where to start. I know I haven’t been blogging much these days, mostly because I can’t. I just can’t bring myself to do it. And who would want to read any of it anyway? I have had no energy, no motivation, and when I’m not taking care of my toddler, I’m lying on the couch, over-thinking, or taking depression naps. What a life.

I was recently given the startling news that my father, grandfather, all my grandfather’s siblings, and my great-grandmother all have/had a rare form of muscular dystrophy, called OPMD. It is genetic (obviously), and there is a 50% chance that I have it. There is also a 50% chance that my brother and two sisters have it as well. And if I have it, there’s a 50% chance my son does as well. The night my grandmother told me, completely out of the blue, an hour before bedtime, I was shaken up. Really shaken up. I spent the next several hours on Google, reading up on the condition, trying to wrap my head around what to expect if/when symptoms occur. I didn’t fall asleep until nearly 3:00 in the morning.

If you want to learn more about the condition, you can click here. I won’t go into details. I’ve calmed down since getting the news, after doing my own research (let’s just say, my grandmother is extremely dramatic, and she made it seem like I 100% had it, and was in for a life of misery, which is not the case). The term “muscular dystrophy” is terrifying, but as far as these types of conditions go, this one isn’t as severe as others. It mainly affects the eyes and facial muscles, but can cause weakness in other parts of the body. Normally, it OPMD doesn’t present symptoms until the 40s to 60s, if at all. My grandfather and father  only recently started displaying symptoms. There is no cure or treatment, but with modern science, who knows what will be possible if/when it presents itself in me.

Next up, relationship crap. As I’m sure some of you know, Kyle started a new job a few months back. He leaves for work very early, and is back before dinner. You’d think this would be great, but it isn’t. He’s always exhausted, and always on edge and cranky. He passes out early every night, and we barely talk anymore. When we do talk, it always seems to turn into an immature fight. I’ve been getting swallowed alive by my depression lately, and struggling to keep up with housework and our toddler, and whenever I ask him to help with anything, it turns into a fight. A fight, and then the silent treatment. He gets defensive about everything, and it is wearing me out. I don’t want to bad mouth him. I know he works hard when he is at work, but he puts in zero effort at home. I’m struggling. I need HELP. But he won’t help me. And I am tired. So, so tired.

On top of all of these things that I need to process and over-think about, my normally sweet, little boy, who turned two at the end of January, is fully immersed in his “terrible twos” phase, and on most days, he really wears me out. Emotionally and physically. Once again, it’s just me with him. Always. Just. Me. 24/7. The weather has been bleak and wet, and we have been trapped inside most days of the week, which takes its toll on both of us. He gets worked up, bounces off the walls, gets sassy and cranky… and I’m so freaking tired, you guys. Always tired.

I’ve been feeling like an absolute failure in every aspect of my life lately. My relationship, my family, my health, my hobbies. Myself. Everything. The only little glimmers of happiness that I have found have been when Liam chooses to share how much he has learned lately. I have been trying hard to teach him his numbers and letters, whenever he sits still for just a second, which seems to never happen. But then, sometimes, we’ll be driving in the car, or eating lunch, and he will just start counting to 10, or correctly naming the letters on TV or in his books, or babbling out actual, tiny sentences, and forming coherent thoughts. Those are the moments that make me feel alright. Make me feel like I’m not a total failure.

I recently got this message from someone in Kyle’s family. Someone I have never met, and who has very opposing views to my own. She is very opinionated, and apparently does not approve of stay-at-home moms. At first, I was a little irritated at the tone in her message, because she blatantly stated that she thinks women who stay home to be stay-at-home moms are not “okay”, but then, I realised that it was a compliment. 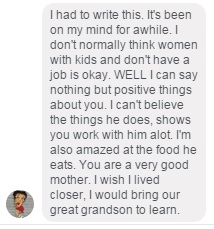 Nobody becomes a parent to get praise from strangers, or from family. And, honestly, I shouldn’t care about what other people think about my life, or my parenting. But, in the moment, I needed this. She doesn’t know anything about my struggles. About my relationship, or my depression, or how my toddler, who I absolutely adore, can drive me to tears with his craziness. She just sees a mother, who works hard to teach her baby boy the things he needs to know. High praise.

I have no one I can talk to about any of this crap. No one I can just sit down and bitch with. I’ve been dealing with shitty, fake friends lately, and I’ve decided to just stop trying to befriend people who will only hurt me in the end. I’m 27 years old now, I don’t need to deal with that high school bullshit. I don’t need “friends” who stalk my social media, take screen shots of things I say, and pass them around to all their friends, so they can tweet passive aggressively about me, and pass judgment on situations they know nothing about. If that sounded a bit specific, that’s because that’s exactly what I’ve been dealing with for the last several months, and I am done with it. So I removed these people from my life, and haven’t looked back.

That’s just my luck. It’s hard for me to make friends, and even harder for me to keep them. People just don’t like me. They always have a problem with my negativity, with my anxiety, with my depression, with my opinions, with how I parent. They just have a problem with me. So, I am alone. Always. Fucking. Alone. I don’t have friends. I don’t have anyone I can trust, or confide in. Even worse, are the ones who feel pity on me, so they reach out, and say that they are there for me, that they care, when they really don’t. They don’t care at all. They just think that they can send a few positive messages, fix all my problems, and feel great about themselves. That’s not how it works, folks. You can’t just lure me into a false sense of security, a false sense of friendship, and then decide that it’s not worth the effort. That I’m not worth the effort. That’s cruel. So fucking cruel. And all day long, all I see are stupid memes and pictures of shit best friends supposedly do, and people just tag each other in them, and talk about all the good times they have, and knowing that I will never have that hurts.

If it weren’t my only form of communication with people that weren’t literal toddlers (even if they act like them from time to time), I’d just delete my social media. It’s so pointless.

That’s it. That’s all I wanted to say. That’s where I’m at in my life. Alone. Hurting. Struggling. Pathetic.

The school’s layout was really weird…

I was looking at a large apartment to rent with my friends Adara and Callie, who I hadn’t seen since high school. We decided to move out to California together to go back to school, though I’m not sure what for. END_OF_DOCUMENT_TOKEN_TO_BE_REPLACED

As they shoved me into the back of the cruiser, the others moved to the lawn, and started shouting and protesting my arrest, but the police did not care.

I was waiting backstage, holding my clarinet, getting ready to go out on stage to perform with people from my childhood and high school years. I recognized several people from high school, some from middle school, and some from district music festivals, even though we were all adults, and I hadn’t seen any of them in eight or more years. END_OF_DOCUMENT_TOKEN_TO_BE_REPLACED

What the hell is wrong with kids these days?

Hey, friends. I’ve been meaning to upload a vlog about everything that has been going on lately, but honestly, I’m too depressed. Kyle has been away at school for three days now, and we just found out that his classes actually last five weeks, and not three weeks, like he was originally told. Five weeks, followed by four to six weeks of driving on the road with his instructor. I haven’t been this bored, lonely, or sad, for a very long time. Luckily, I am able to Skype with him for a few minutes after his classes, but I miss him. Liam and I both do. END_OF_DOCUMENT_TOKEN_TO_BE_REPLACED

My Life as Jan
Blog at WordPress.com.
Loading Comments...