“If you could return to the past to relive a part of your life, either to experience the wonderful bits again, or to do something over, which part of you life would you return to? Why?”

I’m a firm believer that you should try not to dwell on regret and what-ifs, because you can’t go back and change them…. but with that being said, I’m definitely guilty of it. Honestly, if I had the opportunity to go back, I don’t know that I would want to relive anything, or to change anything, for fear of changing the present. What happened in the past should stay there, and in my case, much of it was quite unpleasant, and I’d rather forget. High school was hellish, my family was a train wreck, and even after I left home, a lot of bad things happened… mixed in with a little bit of good. In the present, I have great fiance, who loves me, despite my many flaws, and a beautiful baby boy, who is the light of my life, even on days like today, when all he wants to do is scream.

But… I wouldn’t change anything. I suppose, the one thing that I dwell on the most, is my relationship with my mom. 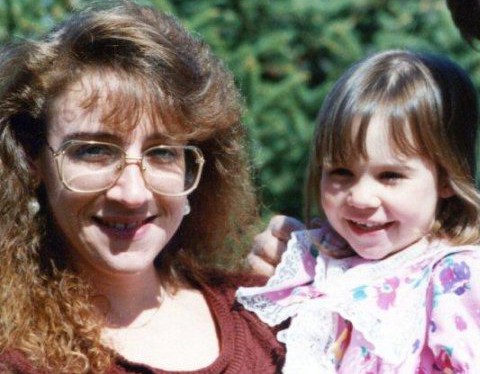 My mother and I were quite estranged for most of my life. Actually, almost all of it. She had a rough childhood, and I feel like her lack of a steady parental figure (she was bounced around several foster homes in her younger years before being returned to my grandmother, though she never told me why) partially attributed to her immaturity, and the distance between us. But she was hardly a bad mom. I always knew that she loved me, in her own way. She worked hard, put food on the table, clothed me, took care of me when I was sick, etc., but there was little warmth in our relationship as I got older. It got worse when she got into a relationship with an unsavory, abusive character (my now step-father, who isn’t such a bad guy anymore), and I resented her for it. On one occasion, I demanded that she put me up for adoption, which reduced her to tears.

As I got older, we grew more distant, sometimes going days without acknowledging each other’s existence. Things that I needed my mom for, she was unable to provide. We never talked about boys, or relationships, or sex, or birth control. We never talked about school, or my interests and hobbies, or the future. Nothing. Because of this, we know very little about each other. I think her lack of effort to reach out to me, or show any kind of interest, made me resent her more, and feel like she didn’t care about me. I acted out, made bad decisions, stopped caring about school, and retreated more into my little, online world than ever before.

She managed to come to my graduation, but left only minutes into it, because her boyfriend had a headache or something. She never saw me get my diploma, or my award that I had earned, and there isn’t a single picture for me to cherish and look back on from that day, aside from two or three snapshots of my friends in I in our caps and gowns during rehearsal. I even had to wait outside the school for a long time afterwards for her to pick me up. I was incredibly hurt and frustrated, and she didn’t understand why. I think that was when I made up my mind to leave.

I left home 8 years ago, and have only gone back once, in 2012, to surprise my mom for her birthday. It didn’t go well. After the first couple hours of hugs and tears, she was back to being the immature, passive-aggressive person that I had always known, and I ended up spending the last few days of my visit at my father’s.

Since then, I have had a son. My mom is now more a part of my life than she has been in many years. Well, my son’s life. This is her first grandchild, and despite the fact that the first year of his life is coming to fruition, she has never met him. She showers him with gifts from afar, and comments on his pictures on Facebook, but never really reaches out to ask about him. In fact, and conversation I try to spark with her ends in her rushing off with some excuse, sometimes right in the middle of a conversation. Closure was never our thing, I guess.

Maybe it’s just me? Maybe we are mutually to blame? I don’t know. I guess some things never change, but… maybe they should stay that way.