I’m starting to not put much weight into what these charts say. I know that my son is a rock star, and is pretty on point in his development, but for him to be doing things that are supposedly moderately difficult for 17 and 18 month olds? I don’t know if I buy into that. It’s a nice thought, but really?

Hello, friends! It has been a looong time since I gave you an update on Liam’s milestones (5 months actually, holy crap!), so I figured, now that he is into his toddlerhood, it would be a good time to share with you where he is at with his development. Like the last few times, I will be using several development charts from the BabyCentre UK site. These charts are not set in stone, and of course all babies develop at their own pace, but I just wanted to share with you all a look at where my kiddo is at.

As of today, Liam is 13 months and 3 weeks old. He wears a size 7 shoe, 18/24m clothes, and a size 5 diaper. I am not sure of his exact height and weight currently, but at his 12 month exam, he was 33 inches tall, and weighed just under 24 pounds. He is a tall boy!  As he is constantly learning and doing new things, I will be showing you the charts for 13-18 month olds. He does at least a little bit from each chart!

One of the biggest things that bothers me about these charts, as well as many other charts on other sites, is that they all claim that my barely one year old should have been saying anywhere from 2-5 real words from the age of 12 months. Well, he doesn’t, and I honestly don’t know any babies his age that do. Heck, I know two year olds that still only say “mama” and “dada“. Liam has been saying “mama” to me for months, but as his daddy is hardly ever home, he doesn’t say “dada” very often. He can say it, he just doesn’t. He has also started saying “oh yeah” recently, and just yesterday, he said what sounded like “no” for the first time. I have also been trying to teach him “hello” and “bye bye” to go with his waving. He also freaking LOVES “peek-a-boo” and plays it with me all the time.

The rest of the chart he has mastered, and we are especially proud of his cup drinking abilities. At 12 months, we switched to a cup with a real straw, not a sippy cup, and he picked it up within two days, and has only used a straw ever since. He can also grip and tip a real cup, without the lid and straw, but I need to hold it so that he doesn’t spill.

This is where things get frustrating, as far as these charts go, because several of these same things were listed on earlier charts, from 8 or 9 months old. He has been finger feeding since he was 7 months old. Most babies definitely are at this point, right? He does everything in this list, except for pointing. He does not point. He does not point to things he wants, he just grabs them, and he doesn’t point to body parts. We have been trying to learn “tummy“, but he still hasn’t picked it up.

This is where we get into the supposedly advanced stuff for someone his age, which seems odd to me. I already covered the talking bit, and as I said before, he just used “no” for the first time ever yesterday. The rest? He’s done it all. Liam has been walking since 10.5 months old, running since 11.5 months, and going up and down steps, and walking backwards, for the last month. He loves running around at the park, or at the store. He also tried to “help” me sweep by carrying around the dust pan, and also knows how to put his toys away, and the laundry into the basket. We also started coloring at 12 months, and he can grip and use a crayon pretty well now, although he doesn’t snow much interest in it. I never would have thought that all of these things didn’t come until 15 months. 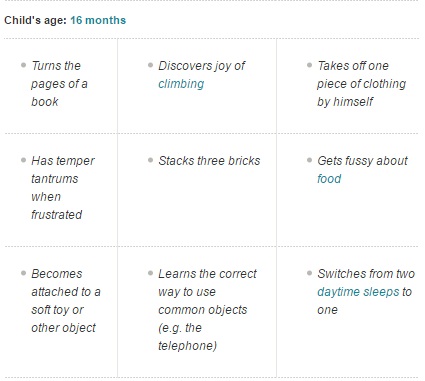 Another confusing chart. Aside from the talking bit, Liam does all of this. He can turn the pages of his board books when we read, he throws EPIC tantrums when he doesn’t get his way, he is obsessed with both his Scout and Froggy toys, and makes sure to let me know that he needs to bring them to the living room in the morning and after his naps, and he has developed fussy eating habits over the last month and a half. Some days, he takes two naps, but most days it is only one. He can also unzip and pull ff his coat or sweatshirt, pull off his shirt by himself, and drop his pants, but needs help stepping out of them. He can put a shirt on over his head as well. He’s been able to stack his blocks for months. He also climbs onto the couch, climbs at the park, and climbs onto his activity table. He has yet to get out of his crib, thankfully. 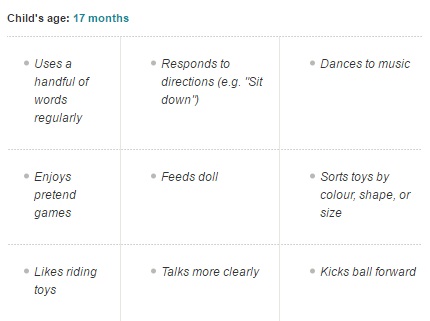 I only wanted to include this list because, once again, it contains two things that Liam has been doing for a little while now, and one thing that he is starting to do. He has a riding toy that he got for Christmas, and has been able to get on and off of it on his own for about a month now. He can also dance, and does it regularly. He also recently started being able to get about half of his shapes into their correct holes on his shape sorter. He also responds to the phrases “sit down” “give me kisses” and “come here“.

Now, this chart, he doesn’t do too much from, obviously. We started brushing his teeth twice a day when he got his first tooth at 10 months (he still only has 4), and I will often hand his toothbrush to him to “brush” them himself while I am changing him for bed. He also can take apart block towers, and put blocks together, and has one amazing throwing arm.

I’m starting to not put much weight into what these charts say. I know that my son is a rock star, and is pretty on point in his development, but for him to be doing things that are supposedly moderately difficult for 17 and 18 month olds? I don’t know if I buy into that. It’s a nice thought, but really? Am I not giving him enough credit, or are these charts catering more to parents of children who may have slower development? Who knows.

Anyway, there’s a look at where my kiddo is at in his development. 🙂 As far as feedings go, he is drinking about 20-24 ounces of whole milk every day, and water for the rest of the day (no juice for us). He also eats 3 pretty hefty meals, and two snacks, every day. This kid eats like a high school football player, I swear. We haven’t really had any issues with constipation either, though some days he only poops once, and strains a bit, but he does go 1-4 (sometimes 5) times a day, depending on what he ate. No allergies so far! He’s also had every possibly seasoning out there (no salt!), and has loved them all. He has started his fussy eating phase, and has all but stopped eating vegetables, unless I sneak them into something he really likes.

Okay, maybe he isn’t that fussy, but he no longer eats sweet potatoes, peas, green beans, or raisins on their own, and it has been a pain to sneak those particular foods into things!

Okay, I’m done now, haha. What do you guys think about these development charts? Are they just really loose guidelines? Did/do your little ones seemed further in their development as well?

Thanks for reading, friends!