Hello, friends! Welcome to the final day of my ‘Three Day Quote Challenge’ posts. For my final quote, I chose one that sums of the very essence of my soul. This quote comes from the utterly fascinating, Mr. Oscar Wilde, who said a plethora of memorable, relatable things in his time on this earth, but this one in particular speaks to me. There is also a similar saying that I try to live by, which is, “Kill them with kindness.” Pretty self-explanatory, I feel. I spend a lot of my time online, and have for the majority of my teenage and adult life, and because of this, I’ve had my fair share of encounters with unsavory characters. I’ve always had a pretty level head, and I’ve learned not to feed the trolls, because it just isn’t worth it, and to be the bigger person. People can only bring you down, and get under your skin, if you allow them.

But, for some weird reason, these type of people also interpret kindness and genuine sincerity as attacks, and boy, it riles them up something fierce. So, whenever you have to deal with someone whose sole intent is to bring you down, or piss you off, follow the wise words of Oscar Wilde, and forgive them. Move on. Walk away. And eventually, after stroking their bruised egos for a little while, they will as well.

One last time, here is a recap of the rules of this challenge::

Here are my final, three nominations for the ‘Three Day Quote Challenge’, and I sincerely hope that you all choose to take part:

I want to thank Christina one last time for nominating me for this challenge; you guys should definitely check her out. I had a lot of fun doing this challenge, and I hope that all of the wonderful individuals that I have chosen have fun with it as well.

Hello, friends. Welcome to day two of my ‘Three Day Quote Challenge’! You can read my quote from day one by clicking here. For today’s quote, I chose this one by the famous Earnest Hemingway, who I learned quite a bit about in high school and college. I like this quote, because it is so simple, and so powerful. I’ve dealt with trust issues throughout most of my life, stepping from issues with both of my parents, as well as my own insecurities with friends, and within relationships. I’ve been hurt, but haven’t we all? It’s taken me a long time to learn to trust again, and it was scary.

No one likes being hurt. But you can’t go through your entire life being afraid to trust those around you, especially the ones you choose to let into your private life. If you don’t give them your trust, then why should they give you theirs? Being hurt, and being betrayed, is a part of life, but it makes you stronger. And smarter. Smart enough to see the signs of when someone isn’t worthy of your trust. Don’t life your life in fear, take the leap, and choose trust. If you don’t trust anyone, you will drive those away who may be worthy of your trust, and your heart.

Here is a recap of the rules of this challenge::

Just like yesterday, I would like to nominate the following three individuals to participate in the ‘Three Day Quote Challenge’, if they so choose:

I really hope you guys will participate, and share with your internet friends some quotes that have had an impact on you in some way. If you can’t, that’s okay, too! I look forward to reading your posts, and to sharing more quotes with you all!

“I don’t know if I continue, even today, always liking myself. But what I learned to do many years ago was to forgive myself. It is very important for every human being to forgive herself or himself because if you live, you will make mistakes- it is inevitable. But once you do and you see the mistake, then you forgive yourself and say, ‘Well, if I’d known better I’d have done better,’ that’s all. So you say to people who you think you may have injured, ‘I’m sorry,’ and then you say to yourself, ‘I’m sorry.’ If we all hold on to the mistake, we can’t see our own glory in the mirror because we have the mistake between our faces and the mirror; we can’t see what we’re capable of being. You can ask forgiveness of others, but in the end the real forgiveness is in one’s own self. I think that young men and women are so caught by the way they see themselves. Now mind you. When a larger society sees them as unattractive, as threats, as too black or too white or too poor or too fat or too thin or too sexual or too asexual, that’s rough. But you can overcome that. The real difficulty is to overcome how you think about yourself. If we don’t have that we never grow, we never learn, and sure as hell we should never teach.”
― Maya Angelou
~~~~~~~~~~~~~~~~~~~~~~~~~~~~

Hello, friends. I am so pleased to tell you that I have once again been chosen by the lovely Christina, over at Just Blue Dutch, to participate in another fun challenge, this time, the ‘Three Day Quote Challenge’. For the next three days, I will be posting a quote with significant meaning to me, and maybe it will help some of you out there as well. I will then be choosing three special followers each day to participate (only if you want to, of course).

For today’s quote, I chose to share with you the wise words of Maya Angelou. This quote is significant to me, because it hits the nail on the head on self-acceptance and self-love, and rings so true for me, personally. I’ve spent so much of my life blaming myself for mistakes of the past, things that I did out of ignorance, and didn’t know any better. I’ve had to forgive myself time and time again, and tell myself that it is okay to make mistakes. This quote has also helped me accept that I am who I am, and that is okay. Just because I may not be someone else’s idea of perfection, doesn’t mean that I’m not perfect just the way that I am.

Now, here are the rules of this challenge::

I would like to nominate the following three individuals to participate in the ‘Three Day Quote Challenge’, if they so choose:

I really hope you guys will participate, and share with your internet friends some quotes that have had an impact on you in some way. I look forward to reading your posts, and to sharing more quotes with you all!

Thanks again to Christina for inviting me to do this challenge, you guys should definitely check her out, she is such a wonderful person. 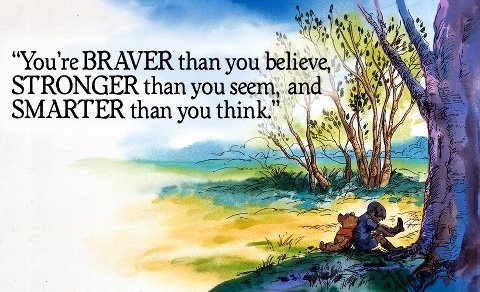 “Do you have a favorite quote that you return to again and again? What is it, and why does it move you?”

I’m usually not one for quotes, for a couple reasons. While I do feel that there have been many inspirational things said throughout time, I also feel that nothing is ever original. Even the most inspirational quotes, said by the world’s most influential people, are just words, pieced together, based on other expressions, or things heard in passing. Nothing is original. I’ve never heard someone say a famous quote, and thought, “Wow, that completely changes everything.”

I also feel weird recognizing people for quotes, when so many word combinations have been spoken in the thousands of years that humans have been speaking. The odds of Martin Luther King’s Jr.’s full “I have A Dream” speech having been said, word for word, 100 years prior is a little unlikely, but you see what I’m saying, right? You see it today, when people take someone’s Tweet, or Facebook post, crop out their name, and circulate it around as a meme or something. You never know where the words originated from, and I know that I wouldn’t feel great seeing someone credited for saying my words, and making them famous, somewhere down the road, doing talk shows and whatnot. I would not be happy.

With that little rant having been typed out, there is one quote that has resonated with me since I was a child. Of course, Winnie the Pooh is just a fictional bear in a children’s show, so really, the writers should be credited with the quote, but I don’t know who they are, so we’ll give this one to Pooh.

“There is something you must always remember: You are braver than you believe, stronger than you seem, and smarter than you think.” ~ Winnie the Pooh

Having dealt with anxiety, depression, abuse, self-esteem issues, and a whole mess of other things over the course of my life, this gentle reminder to believe in myself, no matter what is happening in my life, has helped get me through some tough times. I feel like anyone, and everyone, can relate to this quote, and it can be applied to any situation.

I think that most people are too hard on themselves, and need to be reminded that they are only human, and that no one is perfect. So, I’d like to echo my friend, Pooh, and share a few thoughts of encouragement with you. You are brave. You are strong. You are smart. Believe in yourself, because you deserve so much more credit than you give yourself.

Thank you for reading, friends.