Christina Grimmie was such a beautiful, kind girl, and an amazing talent. She was my sole inspiration to upload videos of myself singing to my old YouTube channel, over four years ago, and I related instantly to her fun personality, and love of Zelda. She had a powerful, unique voice, amazing keyboard skills, and was known for performing in her room, in front of her iconic Sonic poster. 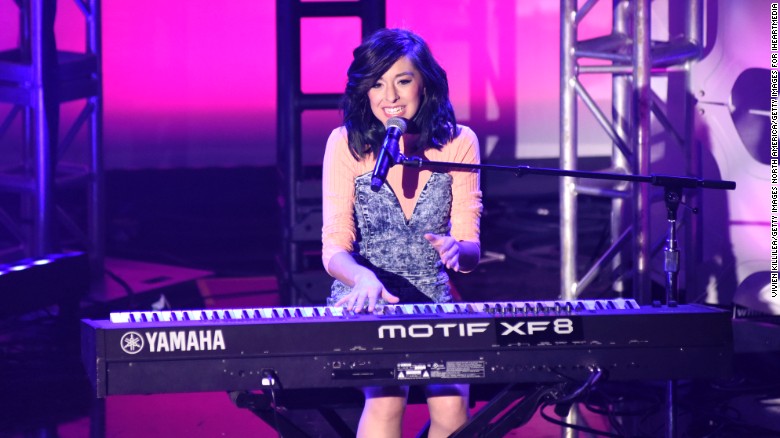 Hello, friends. I wish I had something positive to write about at the moment, but due to some recent events, I’m left feeling quite numb and sad. As many of you may have already heard, Christina Grimmie, talented YouTube phenomenon, and ex-contestant on The Voice, was shot last night while signing autographs at a hometown show in Orlando, Florida, where she was performing. The male shooter, a man who is rumored to be a deranged fan, then shot and killed himself. Christina’s brother, Mark, is being hailed a hero for tackling the shooter before any more harm could be done. Christina was in critical condition when she was brought to the hospital late last night, but her injuries were too severe, and she passed away. She was only 22.

Christina Grimmie was such a beautiful, kind girl, and an amazing talent. She was my sole inspiration to upload videos of myself singing to my old YouTube channel, over four years ago, and I related instantly to her fun personality, and love of Zelda. She had a powerful, unique voice, amazing keyboard skills, and was known for performing in her room, in front of her iconic Sonic poster. She got her start on YouTube, performing beautiful covers of popular songs, but later moved into writing her own music. The first video that I ever watched of Christina’s was her 2009 cover of Rascal Flatt’s “What Hurts the Most”, one of my favorite songs of all time, and I was blown away. She inspired me to push past my own fears, and post my first video of myself singing on my own channel.

As well as singing covers, Christina’s channel is also filled with videos of her performing her own, original works, and a handful of music videos. She put out her first album, Find Me, on June 14th, 2011. It is bittersweet to think that just three days from today will be the 5th anniversary of the release of Find Me. She later moved onto the big time, and was a powerhouse and crowd favorite on The Voice in 2014, impressing audiences across the world with her talent. She performed in numerous concerts in the United States, as well as overseas.

Last night, the hashtag #PrayersForChristina was trending worldwide on Twitter, and many YouTubers and celebrities tweeted their support. Unfortunately, this morning, the hashtag changed to #RIPChristina, with over 1.7 million people tweeting. This is a sad day for the YouTube community, as well as the rest of the world, and many YouTubers, celebrities, and fans have posted their condolences to various social media platforms following the tragic news of Christina’s passing.

There are no words. We lost a beautiful soul with an amazing voice. Our hearts go out to the friends, fans and family of @TheRealGrimmie.

This is so outrageously sad. I have no words. #RIPChristina

my heart is broken. I can't even begin to express how devastated I am. rest in peace you amazing beautiful gifted girl. I love u so much.

We just got to an airport and saw the news about Christina. Thinking of her friends and family😔 #RIPChristinaGrimmie

my God, my heart. christina grimmie was one of the most powerful voices of our generation. ive been a fan for so long. hard loss to swallow.

I'm stunned and disgusted and heartbroken that we lost that sweet little girl… Keeping @TheRealGrimmie family in my heart and mind.

#RIPChristina 😰😢 my thoughts and prayers are with her loved ones..

So sad right now. My thoughts & prayers go out to Christina Grimmie's friends/family. What an incredible talent that won't be forgotten

I'm sad, shocked and confused. We love you so much Grimmie. We are all praying hard that you can pull through this…this just isn't fair.

Today is a sad day indeed, as the world mourns the loss of a great talent. Today is also the 25th birthday of fellow popular YouTube star, and radio personality, Dan Howell, and I sincerely hope that he has a good birthday, despite this sad news.