He fills my heart with so much love. 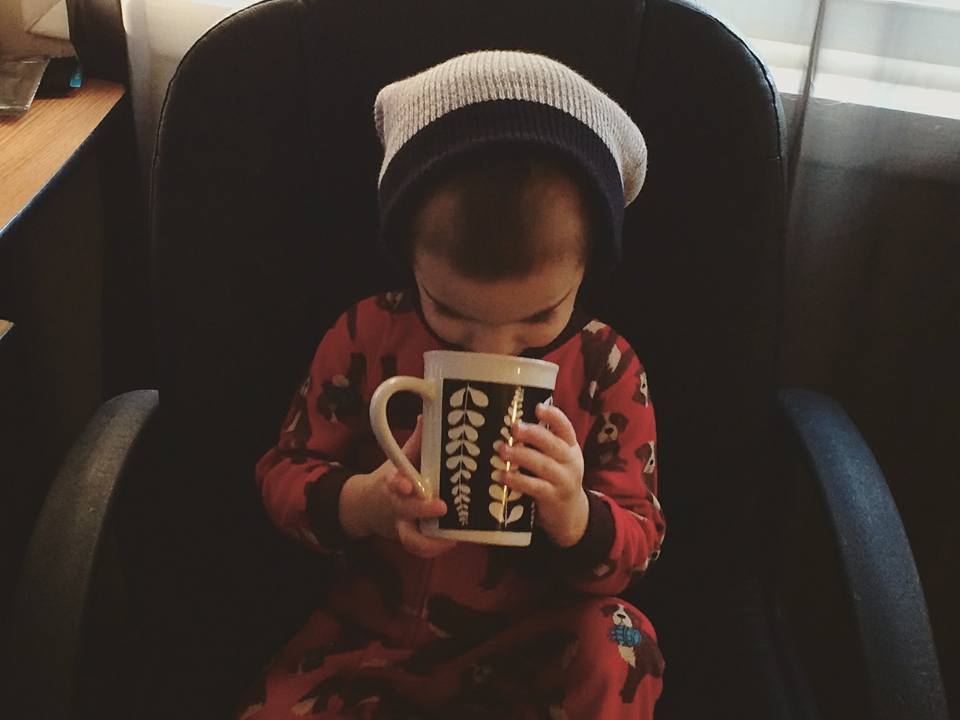 Hello, friends! My little man’s second birthday was on January 23rd, but I have been planning another milestone post for months. It’s been a long time since I did one of these, and I wasn’t sure what all to include, since toddler milestones are SO much different than infant milestones. I no longer am tracking when he rolls over, babbles his first word, or uses a spoon for the first time… he’s mastered all of that, and so much more. I tried to look up the same type of charts that I used when he was a baby, but I guess once your kiddo reaches a certain point, the charts just don’t exist.

So, I guess I’ll wing it, and just do what I did last time!

The Basics:
Liam turned two years old on January 23, 2016. As of now, his exact height is unknown, but he’s weighing in at around 30 pounds. He has his two year checkup on February 3rd, so I’ll be able to fill that in afterwards. He wears a size 3T top, a 2T-3T bottom (depending on the brand and how they run), a size 9 shoe, and a size 5 diaper. He’s still my gentle giant! He has all of his teeth now except for his back molars, which we believe are coming soon, based on the rivers of drool, finger nibbling, and fussiness he’s been exhibiting. He’s still tall and skinny, and we still don’t know where he gets it from!

Physical Development:
Liam is active and full of energy. He runs, jumps, hops, dances, claps his hands, sings, and can even do somersaults around the living room. He is always on the move, and hates sitting still, which makes long car rides a bit difficult. His fine motor skills and coordination are great, and he enjoys twisting the caps on and off of every bottle he comes across, throwing balls and other small objects, stacking and filling cups, blocks, etc., and hiding objects around the house. He also loves to brush his own teeth, wipe himself during diaper changes, and blow his own nose. He can also completely dress and undress himself, including zippers and snap buttons. He’s pretty independant!

Emotional & Social Development:
It’s finally happened, y’all. My son has finally come out of his shell. He still won’t run up to random strangers and demand to be held, but he is finally sharing his all of his love with friends and family that he has seen before. From high fives, to blowing kisses, to giving hugs, to dancing and jumping around, and sharing his toys, my little one has finally started to get over his anxiety and open up. It is so refreshing to see. He is also able to communicate better now, and can articulate, in his own way, what he needs, which has resulted in fewer meltdowns… unless it is something I refuse to let him have. Oh, boy.

Learning & Vocabulary:
We’ve had to unfortunately put some of Liam’s learning on hold because of some other stuff we’ve been dealing with, but plan to pick it up ASAP. Currently, Liam knows all of his basic colors, a handful of shapes, and the numbers 1, 2, and 3. He can also hold up two fingers to tell you how old he is. He knows how to turn his toys (and pretty much anything with a switch or button) on and off, and we recently got a LeapStart to help him hone in on his fine motor skills, and to help him further develop his knowledge on all things toddler.

Oh, and speaking of communication, Liam has made GREAT strides in just the last few months. His word list is long, and silly. I’ve stopped trying to compare him to every other kid I see his age, who seem to be speaking in full sentences. As he’s shown, he will do what he wants, when he is ready. And, boy, can this kid talk when he wants to. Here’s a list of all of Liam’s known words and phrases. On occasion, he has been known to combine a few, like “Bye bye, baby!” to form small sentences as well!

See? He’s come quite a long way! I feel like I may have forgotten a few, but those are all the ones I have written down. His current favorites are “uh oh” and “pizza“. He’s been calling most foods “pizza” lately, haha. Which brings me to the next category…

Foods & Eating:
Aside from when he is sick, which he has been for a couple weeks now, Liam will eat anything and everything I put in front of him. Fruits and veggies, meat, dairy… everything. Some of his favorites include pizza, ice cream, yogurt, pineapple, macaroni with meat sauce, meatballs, carrots, mashed potatoes, and pretty much anything that I have on MY plate. He can also successfully use a normal fork and spoon without difficulty. When it comes to drinks, he likes most things, but it has been difficult getting him to drink his milk. He likes milk, but I think he just finds it boring. He’d much rather have juice, or a smoothie. Since he’s been dealing with a horrible cold, with mucus coming out of just about every hole in his head, drinking milk has been practically non-existent in this house. Hoping he starts drinking more soon. He can successfully drink with a straw, from a normal cup, and from a normal plastic bottle. 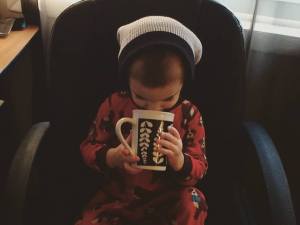 Potty Training:
We started potty training several months ago, and it was going well… then we had to put a pause on it, because there were some big changes being made in our household, and I was unable to continue. Now that things have calmed back down, we plan to pick it up again immediately. For the last month, Liam has been waking up with a dry diaper most mornings, and I’ve had success putting him on his potty, and him going. He still won’t poop on the potty, but he gets really excited when he pees in it. I’m excited to get back into it!

Naps and Bedtime Routine:
Nothing has really changed in our bedtime and nap routine, and I attribute our great success to keeping a strict bedtime and nap schedule. He still takes one nap a day, roughly 2-3 hours, sometimes a bit more or less, and he goes down without a fuss. The same goes with bedtime. He has started stalling, often needing to give daddy an extra hug or two, needing to grab one more lovey, or wanting several more sips of water, but he always gets to bed on time, and falls asleep quickly.

He still sleeps through the night, about 12-13 hours in total, sometimes more. We have a toddler bed, but have yet to transition him to it. There’s been a lot of changes happening lately, and I don’t want to overwhelm him. He’s had some interest in sitting and lying on the bed in the past, but since we only have the one mattress, moving it back and forth is a pain. Having both beds in his room makes his room look a bit small and cluttered, but I am trying to use this crib until I can’t anymore. He hasn’t tried to climb out yet! And, truthfully, I don’t feel like our apartment is 100% child-proofed. Many of the doors are crooked, or don’t close properly, including his bedroom door. Most of our doorknobs have child-proof device on them, but if they don’t close fully, those devices are useless anyway. I think I may just be paranoid, but I’ve read too many horror stories, you know? I still feel unprepared.

Playtime and Activities:
I don’t even know where to start! Liam is at such a fun age now, where he loves to play. He’s gotten so many awesome toys for Christmas and his birthday, that I’ve had to rearrange our living room THREE times to get it all to fit in a spot. He has a play kitchen, tons of play foods and dishes, a play grill, a tool bench and tools, a play vacuum, a play cleaning set with broom, mop, spray bottle, etc, tons and tons of Mega Bloks, cars and trucks, a farm set with a TON of animals, and his current favorite, a two-sided easel with a whiteboard and chalkboard. He loves to color and draw, read books, do wooden puzzles, and recently showed an interest in Playdough as well.

Above all else, he enjoys doing the things that Kyle and I do. He loves to help with the laundry, and put the dishes away. He is no longer afraid of the vacuum, and when he sees me getting ready to vacuum the floors, he runs to get his vacuum to help. He was always stealing my broom and dust pan, so we got him his own, and he loves to sweep the floors. He was always trying to see what we were cooking, and we were afraid he would hurt himself, so we bought him his own play kitchen, and he plays with it all the time. Seeing him turn into a productive, independent little boy, right before my eyes, has been… everything. I’m getting emotional just typing that out!

Oh, and he enjoys watching cute animal videos on YouTube. I even made him his own playlist! 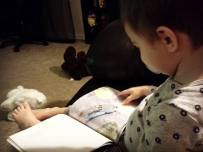 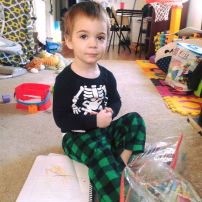 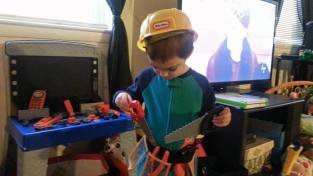 I suppose that’s it for now! I’ll give you all more updates as he grows, but I think that about sums up my sweet, silly, energetic boy. I am so proud of him, and he fills my heart with so much love.

Thanks for reading, friends! 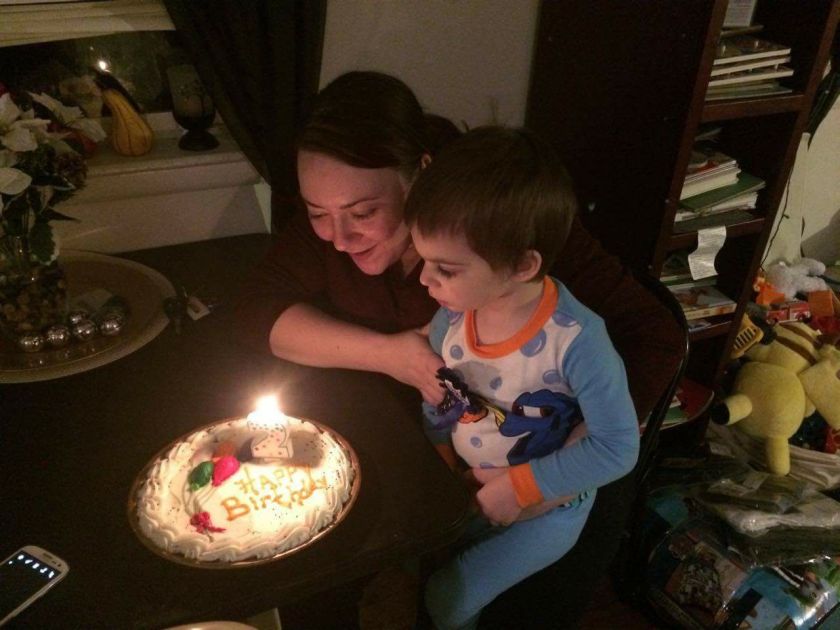